Statcomm Shows The Public The Way To Fire Safety 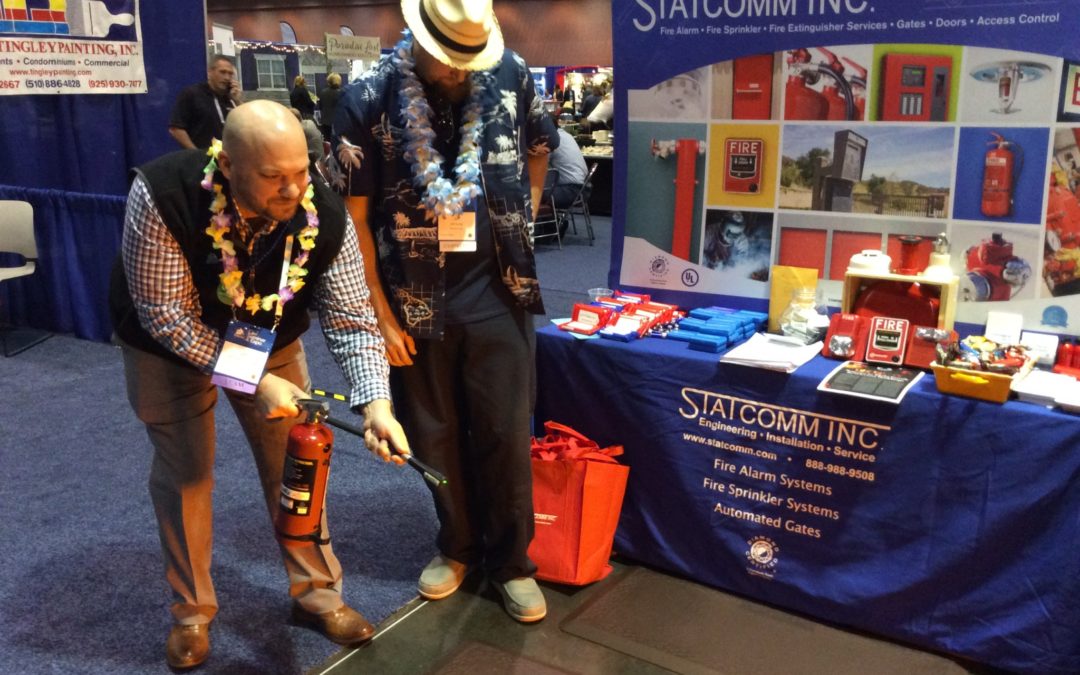 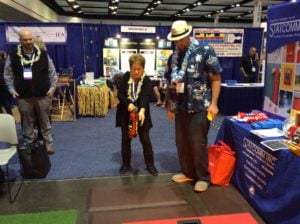 Representatives of Statcomm (including co-owner Bill Wood and Extinguishers and Suppression Systems Department Manager Jeffrey Hurley) recently attended the CACM Expo,  presented by the California Association of Community Managers. It was a terrific experience for both the attendees and the Statcomm team, because we got to have some fun while teaching an incredibly important skill: How to Properly Use a Fire Extinguisher.  We accomplished this through our latest safety training tool: a real-time fire simulator with a laser-guided trainer fire extinguisher that supplements fire extinguisher usage training.

Jeff led attendees through the steps of using a fire extinguisher and demonstrated how the simulation worked.  The extinguisher approximates a real fire extinguisher in in terms of weight, function and appearance.  It utilizes a laser targeting reticle that appears on the fire simulation to show the user where the extinguishing agent would be spread, and the behavior of the fire reacts accordingly.  On the screen, a timer is displayed to show how long it took to extinguish the blaze, giving users more confidence  should they ever need to use a fire extinguisher correctly in a real-life emergency. 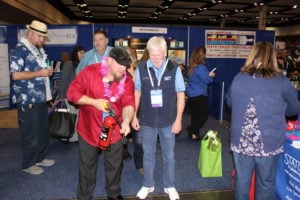 Jeff is quick to point out that the simulator is not and should not be used in place of a comprehensive fire safety training program. Fire prevention and safety encompasses a great deal more than just putting out flames, and using this simulator won’t make anyone a certified fire fighter. However, it can and does effectively allow the user to practice the mechanics and methods of proper fire extinguisher usage.  Fire extinguishers are reported by the NFPA to be 94% effective against fire when used in the first two minutes; People who know how to use them properly are more likely to reduce property damage and associated safety hazards quickly and with a minimal financial and safety loss.

In a demonstration of the system with a guest  attending the expo, Jeff took her through the steps to prepare the extinguisher for action and then practice combating the fire on the screen. One of the most common mistakes made by untrained users (that often occurs before the user ever starts suppressing the fire) is grabbing the handle and the lever simultaneously. (see photos below) As Jeff explained to attendees: “The best way to pick up the extinguisher is to only hold the handle of the extinguisher and keep pressure off the lever until you have completely removed the pull pin and are ready to attack the fire.  If you grasp the handle and the lever at the same time, it applies friction to the pull pin and makes it difficult or even impossible to remove.” “When you’re holding the extinguisher correctly, you can quickly remove the pull pin by twisting it into the tamper seal.  The tamper seal is also made to break when around five pounds of pulling force is applied.” 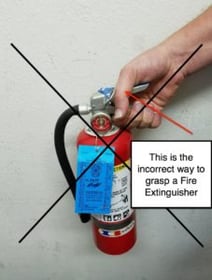 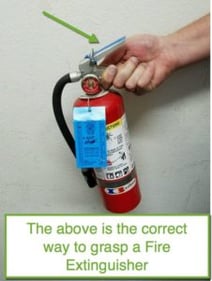 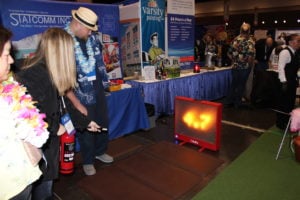 When attendees expressed apprehension that they were strong enough to break the tamper seal, Jeff recalled with pride that using Statcomm’s training methods, a 95 year-old woman was able to complete the training and extinguish the fire!

Standing about 8-10 feet away, the user should aim at the base of the fire and focus on the burning material itself, not the flames. Jeff uses the acronym “PASS,” to describe the proper method for extinguishing a fire:

Most hand held portable fire extinguishers have a discharge time of around 15 seconds. However, as the simulator shows, a small fire can be swiftly extinguished if the user reacts quickly enough. Some attendees  who were walked through the demonstration were able to put out the fire in under 5 seconds!

In a real emergency, seconds count. As a general rule, for every minute a fire is not being suppressed, (given adequate fuel and oxygen supply) it will double in size.  As the fire grows, a single extinguisher may not be enough to fully extinguish the fire.  Modern fire codes require extinguishers to be located within 75 feet of travel from the user’s location, so there will almost always be additional extinguisher accessible.  It is critical to know the location of additional units to aid in extinguishing a fire.

The following information is equally important to assess prior to attempting to extinguish any fire.

It is absolutely critical that you have identified and secured a clear path of egress prior to any attempt to extinguish a fire.  Knowing the nearest exit point will allow you to escape safely if you are unable to get the fire under control.  Fires can behave erratically while being suppressed, and  you never want to create a situation where the fire can cut off your path of escape.

Statcomm’s commitment to fire safety and education is second to none. While this simulator is not the same thing as going through a comprehensive firefighting and safety course, it is nevertheless a valuable tool for educating and preparing the public for emergency response, which can save both lives and property. Statcomm hopes that this simulator, in conjunction with other fire safety training and properly maintained life safety equipment and systems, will help reduce the risk of fire and keep more people safe, healthy and happy.

For more information about fire safety training and Statcomm’s complete line of fire suppression equipment and accessories, visit http://statcomm.com, call us at (650) 988-9508 or, for general inquiries and information, email busdevteam@statcomm.com to speak directly with a company representative. 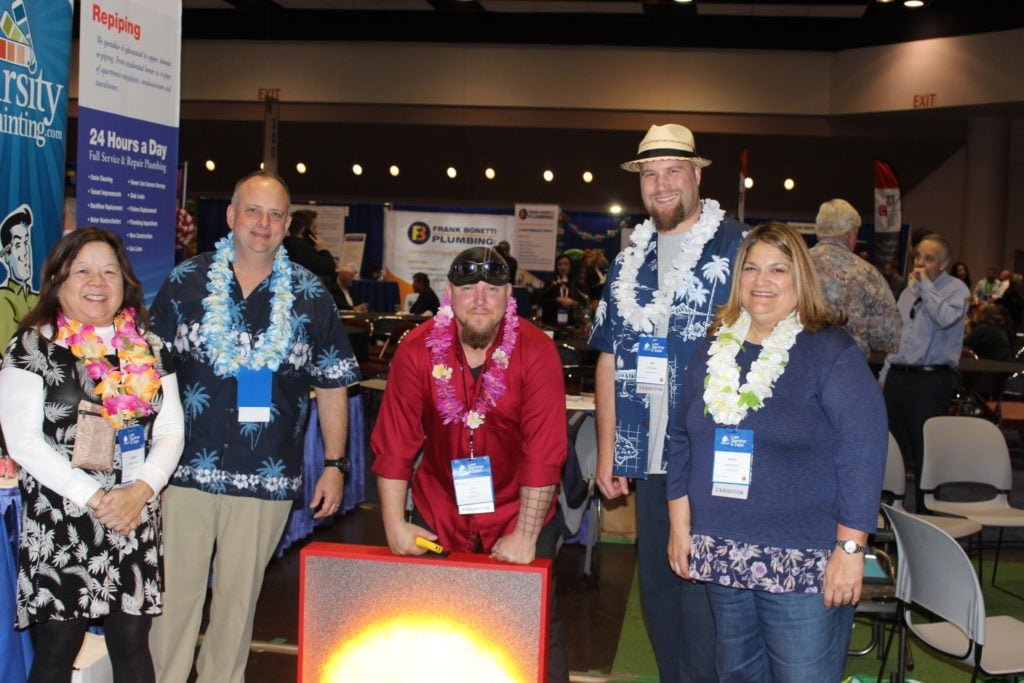